The reigning champions went away to face Bologna for their first Serie A match after the restart, hoping to keep their spot at the top of the table with a win. 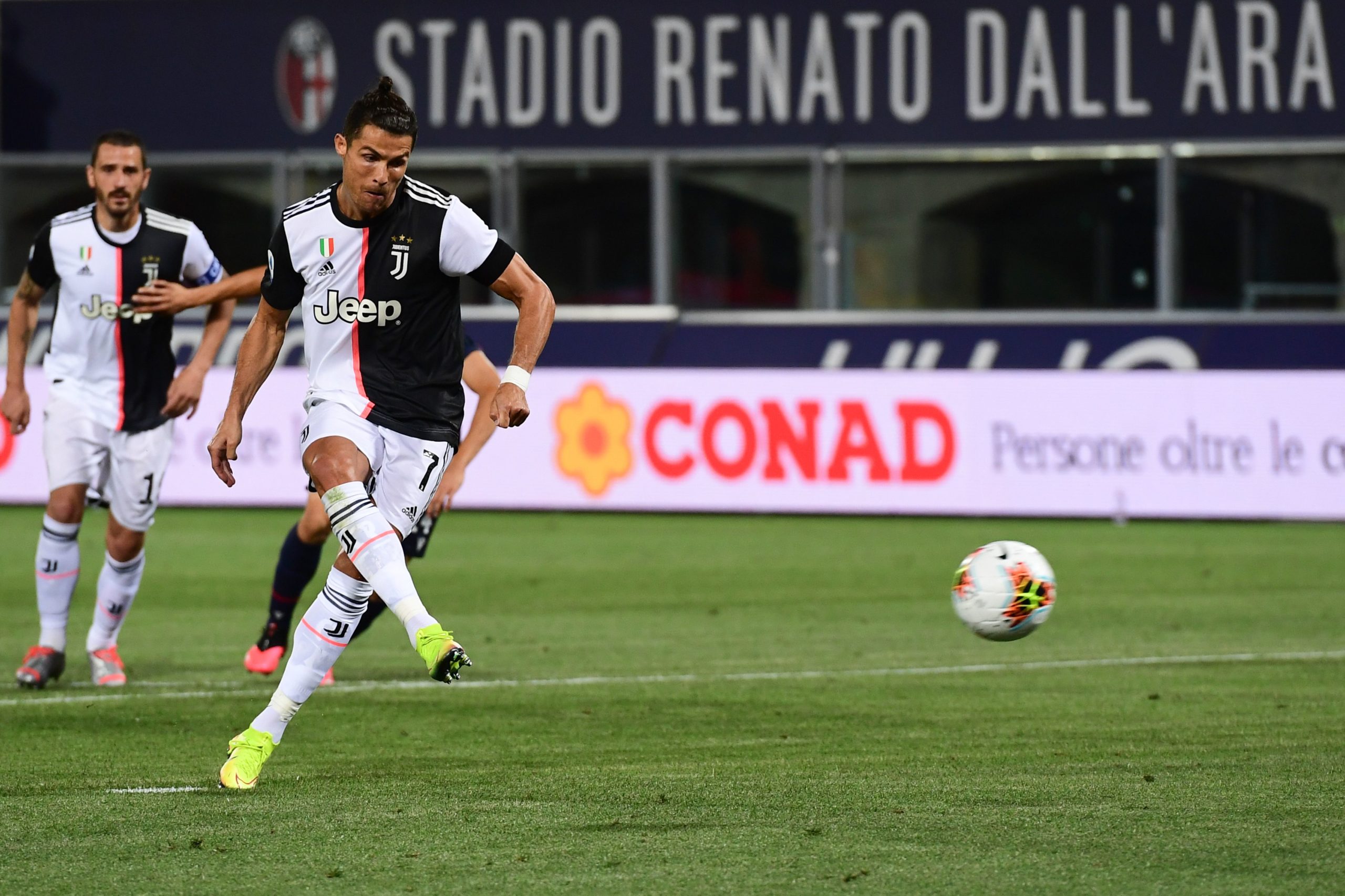 Juventus had the first big chance in the 6th minute, when Ronaldo cut inside from the left and had a hit at Skorupski, who kept it out. After a poor clearance, Dybala had a chance from 15 yards out, but his curling effort was high and wide.

But then in the 20th minute, Denswil took De Ligt down in the penalty area, and Juventus had a penalty after VAR checked the incident. Ronaldo stepped up, and converted it.

Szczęsny slipped in the 36th minute, and his pass went straight to Medel. The Chilean tried to shoot, but didn’t get any power behind it as he thought he was fouled.

Up at the other end, Bernardeschi found Dybala with a great touch. The Argentine turned away from his man, and found the top corner from the edge of the box.

Ronaldo had a great chance to seal the deal in the 52nd minute as he was through on goal. However, his finish went wide.

A minute later, Bernardeschi cut in to his left and tried to find the corner from the right edge of the box, but Skorupski made a great save and directed it onto the post.

Juventus almost had a third in the 90th minute when Costa squared one to Ronaldo, who finished it. But, it was ruled out for offside.

Then, at the other end, Danilo decided that he’d had enough of the game, and got a red card.

Bologna weren’t afraid of pressing Juventus, especially in the opening exchanges. They also tried to build out from the back, but with quick passing.

Sarri has been insisting that Ronaldo is a winger, and that’s where he was fielded. This meant that Dybala played as a false 9, but he dropped far too deep very often, especially early on.

Łukasz Skorupski – Made one or two good stops, but didn’t manage to stop the goals. 6

Takehiro Tomiyasu – Made a couple of loose passes which almost cost his side, and defended well. 5.5

Danilo Larangeira – Drove his side forward with good passes, and was alright in defence. 6.5

Stefano Denswil – Gave away a very needless penalty, and didn’t do too much at the back. 5.25

Mitchell Dijks – Had very little impact down the left flank. 4.5

Gary Medel – Screened his defence well, and his distribution was good too. 6.75

Mattias Svanberg – Tried his luck from range a lot of times, but rarely found the target. 5.25

Riccardo Orsolini – Had a couple of chances, but was very quiet for most of the match. 4.75

Roberto Soriano – Worked hard up front, but didn’t manage to create anything. 5

Nicola Sansone – Pressed well up ahead, but had no impact in front of goal. 5.5

Musa Barrow – Did well in attack as he had a few chances, and created some too, but failed to affect the score-sheet. 6.25

Rodrigo Palacio – Created a few chances after coming on, but didn’t do too much. 5.5

Team – Bologna looked good at the start, but then gave away a cheap penalty and found themselves a goal behind. They still tried to fight back, but after conceding a second, they looked dead and buried. They failed to trouble Szczęsny often, and didn’t deserve anything for their second half display. There are some positives, but also a lot to improve on for Bologna. 5.75

Wojciech Szczęsny – His passing was really poor for most of the match, but he got a clean sheet. 5.5

Matthijs De Ligt – Rather shaky at the start, but he grew into the match. Repelled quite a few of Bologna’s attacks. 6.75

Leonardo Bonucci – Didn’t do too much to do defensively, and his distribution was not too great either. 6

Mattia De Sciglio – Decent defensively, but didn’t manage to get forward too often. He did that once, but then pulled up with a hamstring problem and went off. 6.25

Rodrigo Bentancur – Easily Juventus’ best midfielder. He helped his side at both ends of the pitch, and won the midfield battle with little support from his compatriots. 6.5

Miralem Pjanić – Really loose in midfield, as he misplaced a lot of passes. 4.25

Adrien Rabiot – Decent in the middle, but he didn’t manage to have a major impact. 5.5

Federico Bernardeschi – Assisted the second goal with a neat touch, and almost got a goal too as he hit the post. He was very lively for most of the match, and did well. 7.25

Paulo Dybala – Scored an absolute beauty to double his side’s lead, and dropped very deep down the right to help his side in attack, but went too deep sometimes. 7.25

Danilo – Classic impact substitution, as he got two amazing yellow cards after some stunning tackles to earn a suspension for the next match, when his side was already running out of full-backs. 2.25

Blaise Matuidi – Didn’t have any major impact after coming on, but helped his midfield with his fresh legs. 5.25

Aaron Ramsey – Did nothing after coming on. 4.5

Team – It was not the most convincing of displays from the start, but Juventus managed to find two goals after almost scoring an own goal thanks to some curious passing at the back. Neither team threatened too much thereafter, but they were the better side, and deserved the three points for that. 6.25

Gianluca Rocchi got his calls right, sometimes with the help of VAR, but he’ll be happy with the match. 6.75

Bologna stay in 10th spot, and remain comfortably clear of the drop.

Juventus also hold their place at the top of the table, and have a 4-point lead until Lazio play.