Italian football was back with a big clash – the second leg of the Coppa Italia semifinal between Juventus and AC Milan. The first leg ended in a 1-1 draw at the San Siro , handing a slight advantage to the visitors, but it was all to play for at the Allianz Stadium. 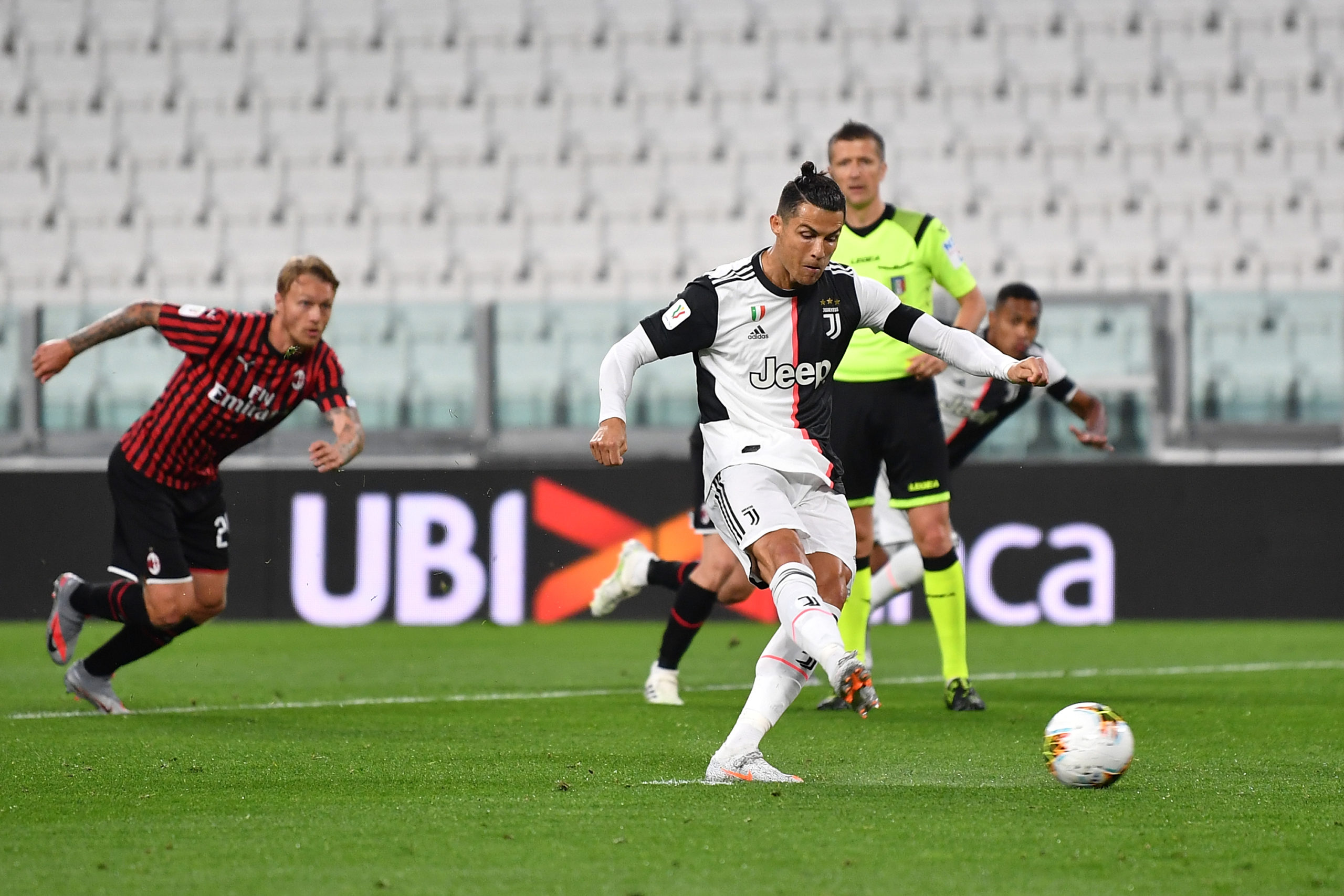 Juventus started off very strong, and the whole match was effectively an attack-only training session.

They were rewarded with a penalty at the end of it after the ball struck Conti’s arm. However, Ronaldo only managed to strike the post.

As the ball was cleared, Rebić went clattering into Danilo’s chest, and was given his marching orders.

Milan spent 74 minutes with 10 men, but they defended very well, and so it ended 0-0 in Turin.

There wasn’t much to speak of tactically. The match was basically a 90 minute long attacking training session for Juventus, as Milan could do nothing due to the lack of a striker.

Gianluigi Buffon – Might as well have gone up the stands and made himself comfortable in a seat, because he had absolutely nothing to do except watch his side go forward, and take the odd goal-kick. 6

Danilo – Defended well, and his occasional crosses were threatening too. 6.25

Matthijs De Ligt – Didn’t have anything to do at the back, but did his job when he was called into action. 6.5

Leonardo Bonucci – He was not needed at the back, so he went forward and had a couple of headed chances, but he failed to make them count. 6.25

Alex Sandro – Got forward pretty often, but failed to make a major impact. 6

Miralem Pjanić – He was absolutely nowhere in the match. The only thing he did was take one or two decent corners. 5.25

Rodrigo Bentancur – Solid in holding midfield, as he broke down the rare Milan attacks. 6.25

Blaise Matuidi – Had one or two decent chances, but failed to convert. Was pretty jobless in midfield. 5.75

Paulo Dybala – Ceertainly Juve’s greatest attacking threat. He caused problems with his dribbling, but failed to show up in front of goal. 6.5

Cristiano Ronaldo – Failed to have a major impact in the match. Had a massive chance early on from the penalty spot, but he missed it. Had a few decent chances after that, but he failed to trouble Donnarumma, and was selfish at times. He was always shadowed by a Milan defender, and most of his shots were blocked or deflected. 5

Douglas Costa – Saw a decent amount of the ball, but he failed to make anything substantial happen. 6

Sami Khedira – Failed to do anything except get a yellow card. 4.25

Federico Bernardeschi – Saw a bit of the ball, but failed to make things happen. 5

Team – Juventus had almost all of the possession, but they simply failed to make it count. After the penalty and the numerical advantage, they did nothing to worry Donnarumma. A very lacklustre performance from them, and they can count themselves lucky to qualify for a final after a macth like that. 5.5

Gianluigi Donnarumma – Had a hand in tipping the penalty on to the post. Made numerous saves after that to keep his side in the match. 8

Andrea Conti – You can’t blame him for the penalty, and he was solid in defence, as he kept Douglas Costa quiet. 7.

Simon Kjær – Was strong in defence, as he helped Romagnoli. Dominated the air-space in his box. 7.25

Alessio Romagnoli – Heroic defensive display from the 25 year-old, as he flew into crucial challenges everywhere. Kept Ronaldo quiet as well. 7.75

Davide Calabria – Didn’t have too much to do down the left, but was strong defensively. 6.75

Ismaël Bennacer – He was loose at times, but helped out defensively. His errors almost cost his side dear, but his defenders bailed him out. 4.75

Franck Kessié – Very strong defensively, and also tried to urge his side forward at times. 7

Lucas Paquetá – Couldn’t do anything in attack, but helped out well in defence. 6.5

Hakan Çalhanoğlu – Worked very hard to string his side’s few attacks together, but his crossing was disappointing. 6

Ante Rebić – Didn’t do anything in the match except make an attempt to assault Danilo. Was given a deserved red card for it, but he wasn’t really missed, because he did absolutely nothing before that. 1.75

Rafael Leão – Tried to make things happen, but failed to do much. 5

Team – Milan showed no attacking intent for the first 15 minutes, and after losing a man, they defended well. Obviously, their attacking threat was almost non-existent, but they showed good fight to stay in the game. Unfortunately for the Rossoneri, the shutout wasn’t enough. 6.75

Daniele Orsato had a few things to sort out. His decision to give the penalty might be controversial, but it was right in my view. The red card was almost certainly the right call. Didn’t have too much work thereafter, but he did his job well. 8