Record-Breaker Mertens Manages to Get Napoli Past Inter

Napoli hosted Inter Milan for the Second Leg of the Coppa Italia Semifinal. The club from Naples carried a one-goal advantage from the first leg, and looked to build on that to set up a final with Juventus. 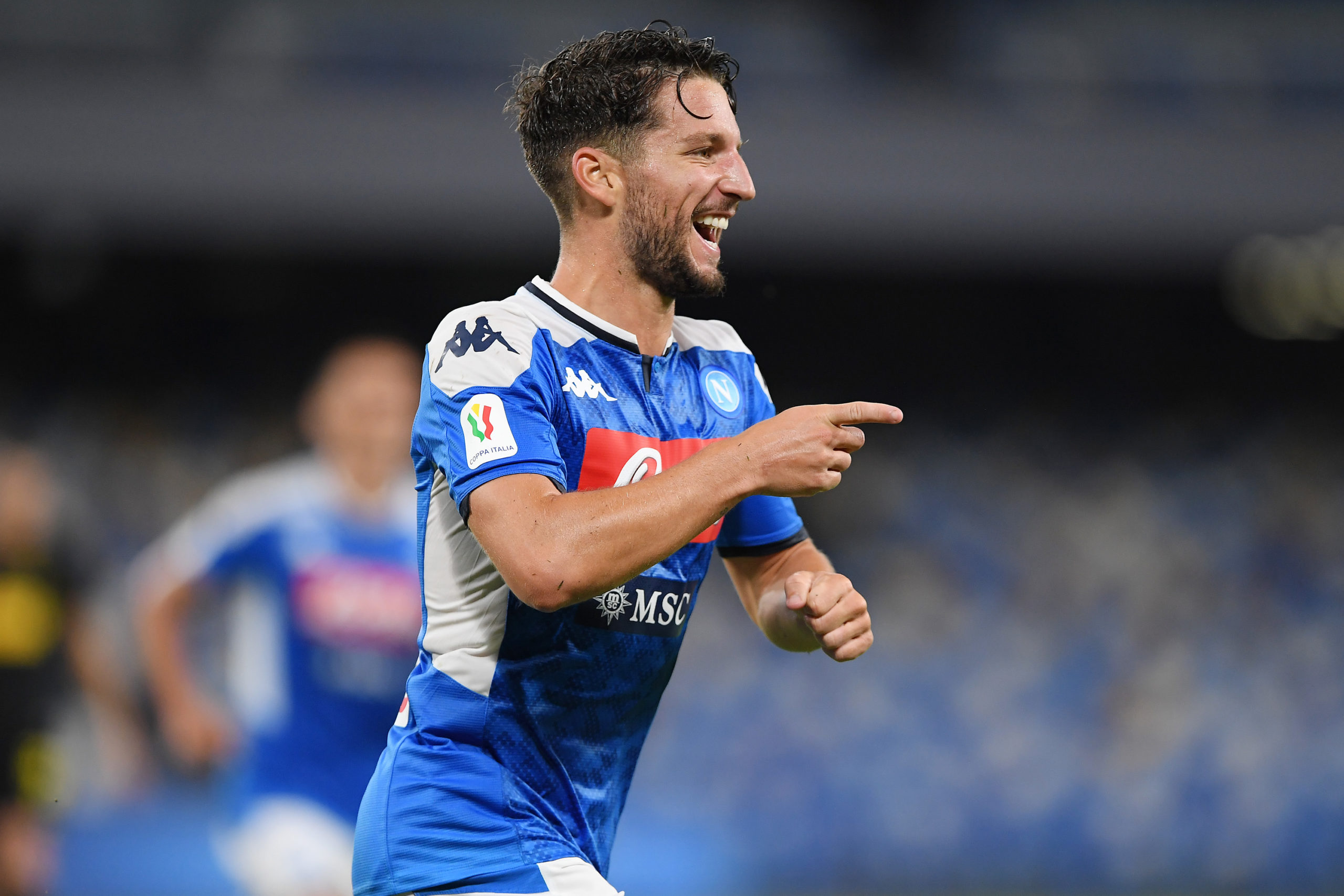 The match was very open from the start, and only 2 minutes in, Eriksen’s corner evaded all the defenders and went through Ospina’s legs to give Inter the lead.

Inter looked stronger after that, and they came close in the 31st minute when Lukaku’s header off Young’s cross was saved by Ospina.

The Colombian was called into action again, when Candreva’s rocket had to be saved.

The keeper was at the forefront of things after the resulting corner too, when he sent a ball up the pitch to Insigne. The captain squared it for Mertens, who smashed it home to get his 122nd goal for Napoli – one better than Marek Hamšík’s tally.

After the break, Inter lacked the sharpness they had in the first half, and neither goalkeeper was troubled.

In the 81st minute, Sánchez found Eriksen on the edge of the box with a backheel, but it was Ospina to the rescue yet again for Napoli.

Inter had a numerical advantage in midfield, and they looked to exploit that as they passed their way forward in attack.

Napoli were happier to bypass the midfield, as they looked to hit Inter on the counter.

David Ospina – Arguably could have done better to prevent Inter’s goal but he was solid thereafter. He made an array of important saves, most notably off Lukaku and Candreva. Did well to find Insigne with an incisive long ball before the equaliser too. Didn’t have too much to do in the second half except the massive save he made off Eriksen late on. 7.5

Giovanni Di Lorenzo – He was solid defensively, but never managed to get forward. 6.25

Nikola Maksimović – Solid at the back, as he kept Martínez in check. 6.75

Kalidou Koulibaly – Did well to contain Lukaku for most of the match. 6.5

Elseid Hysaj – Should have done better to repel the corner which went in. Failed to create any impact on the match. 4

Elif Elmas – Didn’t have a major impact in the match, as he was overrun by Inter’s midfielders. 4.25

Diego Demme – Decent in holding midfield, but couldn’t do anything to urge his side forward. 5.25

Piotr Zieliński – Not great in the match. His passing was loose, and he failed to stop the Inter midfielders from running through him. 4.5

Matteo Politano – Had a few lively spells, but largely uninvolved. 5.5

Dries Mertens – Kept quiet for most of the match, but he did well to get the goal. 6.25

Lorenzo Insigne – Napoli’s greatest attacking threat. He drove down the left flank whenever he could and gave Škriniar one or two problems. Also got the all-important assist for the equaliser. 6.5

Fabián Ruiz Peña – Rather wasteful after coming on. 4

Team – Napoli were very unconvincing in the first half, but they managed to get a goal after a good counterattack. That was the only time in the match when they troubled Handanović, because they looked toothless for most of it. Their defence was decent, but really, it was Ospina who won the tie for Gli Azzurri. 5.75

Samir Handanović – Had nothing to do except face the goal, but he couldn’t stop it. 5.5

Milan Škriniar – Decent at the back, as he kept Insigne away from goal for most of it. 6.75

Stefan De Vrij – Kept Mertens quiet for most of the match well, but didn’t have too many problems. 6.5

Alessandro Bastoni – Decent in defence, but didn’t have too much work. Sent one or two good long balls up the pitch too. 6.75

Antonio Candreva – Very lively down the right, as he got forward very often. His crosses were decent too. 6.5

Nicolò Barella – His passing from midfield was great, as he strung his side’s attacks together. 6.75

Marcelo Brozović – Did well in midfield, as his distribution was good. 6.25

Ashley Young – Good on the right flank, as he defended well and got forward often too. Found Lukaku with one or two of his crosses as well. 7

Christian Eriksen – Got slightly lucky with the goal, but it was indeed a deadly delivery from the corner. Very lively in midfield thereafter. Threatened Ospina’s goal too, but failed to get a second. 7.25

Lautaro Martínez – Didn’t have any effect on the game up front. 4.5

Romelu Lukaku – Threatened the goal a couple of times, and dropped deep to support his side in build-up play. 6.75

Victor Moses – Good down the right after he came on, but he failed to create anything substantial. 6

Alexis Sánchez – Worked very hard in attack and even created one or two good chances, but the goal was missing. 6.5

Cristiano Biraghi – Not bad down the left, but didn’t have too much of an impact. 5.5

Team – Inter were the better side by a long-margin in the first half, but they could only get one goal. Ospina denied them on a few occasions, and the one chance they conceded was converted by Mertens. They seemed a bit shocked after the equaliser, and failed to recreate the same attacking threat. The loss on aggregate is slightly unfair to the Nerazzurri, but they do have quite a bit to work on. 6.25

Gianluca Rocchi didn’t have too many tough calls to make, but he did his job well. 7

Juventus Settle With Milan for a Boring Draw to Reach Coppa Italia Final on Away Goals
Antonio Conte has no complaints over Inter’s Cup exit, credits David Ospina for Napoli’s progress