Napoli and Juventus were facing each other once again – this time to decide the Champions of the Coppa Italia. Juventus looked to continue their Italian domination, but Napoli wanted to get their hands on their first trophy since 2014. 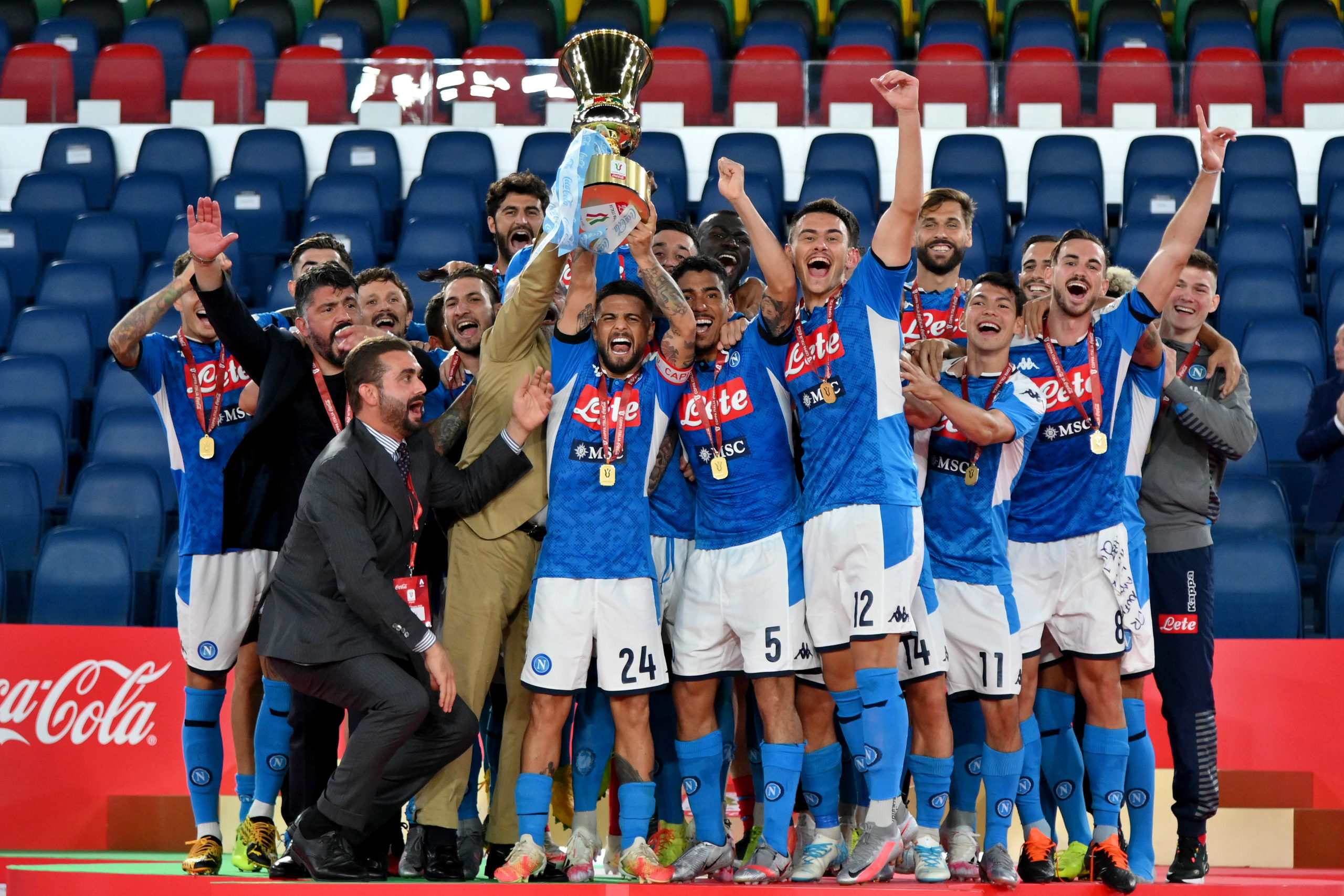 Juventus had the first big chance in the 5th minute when Callejón’s misplaced pass found Dybala. The Argentine played it to Ronaldo on the edge of the box, but he could only draw a save out of Meret.

In the 24th minute, Napoli won a rather lucky free-kick, which Insigne used to test the woodwork.

4 minutes before half-time, Demme wriggled through Juventus’ defence, and almost put the ball through Buffon’s legs, but the veteran put it out for a corner.

The clearance from the resultant corner fell to Insigne, who almost found the corner of the net, but Buffon came flying to his side’s rescue.

Neither goalkeeper had too much to worry about until the 92nd minute, when Maksimović’s header almost went in. Buffon only parried it out to Elmas, whose shot was deflected onto the post by a combination of Buffon, Bonucci and Bernardeschi.

It was scoreless after 90 minutes, so we went to penalties.

Dybala stepped up to take the first penalty. Meret guessed right and saved the penalty.

Napoli’s captain, Insigne was next, and he slotted it past Buffon.

Danilo went next, and he skied his effort over the bar.

Politano had the chance to double his side’s advantage, and he did so after stinging Buffon’s gloves.

Bonucci was the first Juventus player to convert, after his effort went in off the bar.

Maksimović was the next defender to step up, and he thumped it home.

Ramsey knew he had to score to keep his side in the match, and he did it.

Milik stepped up, knowing that he could win the Coppa for his side. He sent Buffon the wrong way, and found the net.

And so, the penalty shoot-out ended 4-2 to Napoli, who lifted their sixth Coppa Italia title.

Napoli were organised to be very compact in defence, and just like the match against Inter, they didn’t mind counter-attacking.

Juventus too didn’t change too much from the last match. They kept a lot of possession, and pressed high up the pitch with good intensity. And as usual, they kept things fluid up front with their mobile front three.

Alex Meret – Made one or two important saves in normal time, and made a big save in the shoot-out. 7.25

Giovanni Di Lorenzo – Didn’t do too much in both attack and defence. 5.75

Nikola Maksimović – Strong at the back once again, and he let nothing go past him. Did well to net a penalty too. 7.25

Kalidou Koulibaly – Made an array of tackles and clearances at the back, as he looked absolutely solid. 7.5

Mário Rui – Looked strong defensively, and went up the pitch at times as well. 6.5

Fabián Ruiz Peña – Worked his socks off in midfield, as he pressed with great intensity and tried to take his side forward in attack. 6.5

Diego Demme – Good in holding midfield, but he didn’t have an impact on either end. 6.25

Piotr Zieliński – Failed to make too much happen in midfield, and didn’t look too sharp. 5.25

José Callejón – Saw little of the ball, and made a few loose passes at the back which almost cost his side. Didn’t do too much in front of goal either. 4.25

Dries Mertens – Kept very quiet up front, and failed to have an impact. 4.5

Lorenzo Insigne – Was Napoli’s biggest attacking threat, as he clipped the post from a free-kick, and tested Buffon from range a couple of times. Scored a penalty as well. 6.25

Arkadiusz Milik – Had one or two good sights of goal, but he always missed the target. Converted the winning penalty too. 6

Matteo Politano – Created a few chances after coming on, but couldn’t threaten the goal. Made the most of his chance from the penalty spot. 6.5

Team – Napoli were sound tactically, and they executed their plan well too. They kept Juventus away from their goal, and threatened Buffon a couple of times as well. Gli Azzurri were clinical in their spot-kicks, and deserved the win. 6.5

Gianluigi Buffon – Made a few massive saves to preserve his clean sheet. 7.5

Juan Cuadrado – Forayed far forward for most of the match, and delivered a few good crosses. Saw a lot of the ball too, and his passing was good. 6.5

Leonardo Bonucci – Solid at the back, and tried his luck against Meret a couple of times too. Converted a penalty in the shoot-out as well. 6.75

Matthijs De Ligt – Good in defence, but he didn’t have too much to do. 6.5

Alex Sandro – Good at the back, but he failed to have any impact up front. 6

Rodrigo Bentancur – Was good in midfield, as he tried his best to take his side forward. 6.5

Miralem Pjanić – Decent in holding midfield, but failed to do too much in attack. 6

Blaise Matuidi – Kept very quiet in the middle, and therefore he failed to affect the match. 5.25

Douglas Costa – Saw a good amount of the ball, but couldn’t do anything to threaten the goal. 5.75

Paulo Dybala – Yet again he was his side’s most potent attacker. Made a lot of threatening runs and dribbles, but just failed to create anything in front of goal. Missed his side’s first spot-kick though. 5.75

Cristiano Ronaldo – Had one or two sights of goal, but was kept very quiet for most of the match. 5.5

Danilo – Decent down the right, but failed to make things happen up front. Missed a penalty as well as he put it high. 5.25

Federico Bernardeschi – Had little impact after coming on. 5

Team – A different match, but the same story for Juventus. The Bianconeri had more of the ball once again, but simply failed to threaten the opposition’s goal. The only difference this time was that they conceded more good chances than they created. Yet another unconvincing performance from the league-leaders, and they deserved the loss. 5.75

Daniele Doveri had a relatively easy match, and will be happy with his showing. 7